Hypothyroidism: Could it be treated with LIGHT?

One of the most popular articles of my blog has been about the therapeutic effects red and near-infrared light. An edited version the article has also been published at Perfect Health Diet blog.

Hundreds of studies have shown that red or near-infrared light can be used in the treatment of various medical conditions. According to some of the studies, it could possibly...

The treatment is officially called photobiomodulation (PBM). It was previously called low-level laser therapy (LLLT), because most of the research was conducted with laser light sources. Nowadays it is considered proven that the positive effects of red and near-infrared light do not require lasers, and therefore many photobiomodulation research groups are currently using LEDs.


Photobiomodulation (PBM) is based on the research showing that red light and near-infrared radiation can boost cellular energy metabolism by activating the enzyme complex called cytochrome c oxidase. This energy-boosting effect can apparently protect tissues from stress and inflammation.

Many interesting results have been published regarding the treatment of hypothyroidism with PBM. Here's my short summary of the results.

1) In a Brazilian pilot study (2010), 47% of the hypothyroid patients receiving 10 treatment sessions of PBM with near-infrared laser light maintained normal thyroid hormone levels without thyroid medication (levothyroxine; LT4) at the end of the 9-month follow-up.

Other benefits were also noted:  TPOAb levels decreased by 39%, echogenicity index (EI) increased by 22% and normalization of thyroid volume was noted in three of the seven patients with abnormal thyroid volume.

2) In a Brazilian randomized controlled trial (2013), 48% of the hypothyroid patients receiving 10 sessions of PBM maintained normal thyroid hormone levels without thyroid medication at the end of the 9-month follow-up.


3) A Turkish randomized study (2020) recruited 350 patients found that six sessions of PBM with near-infrared light (850 nm) during three consecutive days was associated with 50% decrease in levothyroxine (LT4) medication usage, 53% increase in T3 levels and 73% decrease in TPOAb levels three months after the PBM treatments. According to the report, 28.5% of the patients had also completely stopped using the LT4 medication.

4) In an Ukrainian dissertation study by Viktor Dubovik (2003), it was concluded that PBM can decrease medication requirements by 50-75% in people with postsurgical hypothyroidism. Antibodies for Tg and TPO were decreased after the treatment. 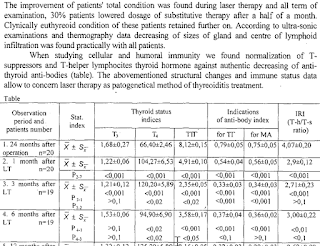 5) Another Ukrainian study by Yulia Buldygina (2002) concluded that PBM might be beneficial for hypertrophic forms of autoimmune thyroiditis. In this study, they utilized a red light (633 and 850 nm) from a laser device.


Laser therapy allows in 92% of patients delay the development of the pathological process, and 40% - to reach its full or partial regression or prevent progression to hypothyroidism and eliminate its initial manifestations, as evidenced by normalization of thyroid stimulating hormone. [...]

Laser therapy can be used as an independent method of treatment of hypertrophic form of autoimmune thyroiditis or as an additional method that increases the effectiveness of traditional drug therapy." [Translated from the original text by Google Translate]


6) Ukrainian study by Katerina Misura (2006) showed that PBM can improve the treatment results in hypothyroid patients who also suffer from cardiovascular disease. These patients don't usually take adequate amounts of oral thyroxine, because of the possibility of severe cardiovascular symptoms.

Both groups received various drugs including levothyroxine, lovastatin and aspirin, but intervention group also received PBM treatment. In this group, significant improvements in thyroid hormone and cholesterol levels were observed.


7) In a Russian dissertation study (2010), 17% of the hypothyroid patients receiving PBM on the thyroid area could discontinue thyroid medication, and 38% could decrease the dose by 25-50µg.

8) In an Russian report (2014), the treatment of 347 subclinically hypothyroid women was described.

Their baseline TSH averaged at 9.1 mIU/L, but after ten sessions of PBM, the TSH was normalized in 337 (97%) of these women. Their TSH averaged at 2.2 mIU/L after the PBM treatments.

9) A Russian study by Alexander Poljakov (1997) includes some data of chronic autoimmune thyroiditis patients who underwent a thyroid surgery.

Photobiomodulation (PBM) with near-infrared light (890 nm) from a laser source was found to improve thyroid hormone levels of these patients. It was also mentioned that the patients treated with PBM require half as much thyroxine as usually.

10) Ukrainian researchers also conducted an animal study, in which they they induced experimental autoimmune thyroiditis to rabbits (n=40). Apparently, photobiomodulation (PBM) reversed most of the thyroiditis-associated changes to the thyroid tissue.


(Note: Since most of the reports cited are in Russian/Ukrainian language, I hope that I'll find a native person to proofread and confirm my summaries. I'm only half-Russian, and I cannot read these languages perfectly.)

I would say these results are very impressive. I'm not aware of any other treatment that could improve several markers related to hypothyroidism and even allow some patients to discontinue their thyroid medication. This would make PBM (previously "LLLT") a very appealing future treatment to hypothyroid patients.

Since ~400 papers on PBM are being published annually, I guess that it won't take many years until we know much more about possibilities in the use of light in the treatment of hypothyroidism and many other diseases.

4.  Addendum: How can we apply these results in real life?

These photobiomodulation (PBM) studies were all conducted with a laser device (Thera Lase in Brazil; Mustang 2000 in Russia/Ukraine). The usage of lasers has been very common in PBM, which was previously called low-level laser (light) therapy (LLLT).

Actually, 110 years ago there were some books that recommended the light of incandescent bulbs in the treatment of various diseases such as obesity, diabetes, balding and chronic fatigue. The authors of those books understood it's the red/infrared part of the light that is responsible for these beneficial health effects.

I would assume that the main reason why the researchers have favoured laser in the past, is the fact that it is easy to control several dose parameters accurately when you are using laser light instead of light bulbs: wavelength, power output, power density, spot size, pulsing, total energy per spot...

As a conclusion, I would say that it's possible that red and near-infrared LEDs and even ordinary incandescent/heat/halogen bulbs could have these beneficial effects since they emit the right wavelengths (red light and near-infrared). However, as I've explained in my comprehensive article about PBM, I think one needs to be careful about the dosing, as photobiomodulation is characterized by the biphasic dose response, where either too little or too much light might be ineffective.

[4] Dubovik V. The postoperative rehabilitation of the autoimmune thyroiditis patients with the use of low­intensive laser radiation. http://librar.org.ua/sections_load.php?s=medicine&amp;id=5298 [I also paid for an Ukrainian translator to make an English copy of the Ukrainian article, so I have an English PDF]

Gopkalova I, Dubovik V, Danilevsky V. Effectiveness of using laserotherapy in the treatment of autoimmune thyreoiditis. CAOL 2003. Institute of Endocrine Pathology Problems of Academy of Medical Sciences of Ukraine (IEPP)

[6] Misura E.V. A complex method for treating patients with autoimmune thyroiditis in presence of hypothyroidism and accompanying coronary disease. - Manuscript. The dissertation competing for a scientific degree of Candidate of Medical Science in specialty 14.01.14 – Endocrinology. V. Danilevsky Institute of Endocrine Pathology Problems of the Academy of Medical Sciences of Ukraine, Kharkov, 2006.

[10] Dubovik V. The postoperative rehabilitation of the autoimmune thyroiditis patients with the use of low­intensive laser radiation. http://librar.org.ua/sections_load.php?s=medicine&amp;id=5298

Gopkalova I, Dubovik V. Reparative regeneration processes of thyroid gland and timus at experimental autoimmune thyroiditis after laserotherapy. (2010) http://ieeexplore.ieee.org/xpl/articleDetails.jsp?arnumber=5634184
Posted by Vladimir Heiskanen (Valtsu) at 2:23 AM

I greatly enjoy reading medical research and I tend to spend a lot time trying to understand health and diseases from new perspectives.

Some of my articles have been published at 180DegreeHealth.

If you consider my writings valuable, consider a monthly donation of $1 Patreon :-)